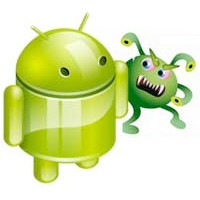 Android remains at number one Operating System worldwide so also getting targeted by Malware creators.

In 2013 about 98 percent of all malware detected were targeted android platform  making it as a prime target for malicious attacks.

“Caution! Detected malware on your phone!”

And having download link or attached apk of malware with mail. The sample received by McAfee Labs from customer in Poland with the name Kaspersky_Mobile_Security.apk Phishing mail with following attachment:

The body of the message states that the bank is providing the attached free mobile security application to detect malware that steals SMS codes (mTANs) for authorizing electronic transactions. However, the attached application is in fact a version of the Android RAT SandroRat, which was announced at the end of the last year in the Hacking Community HackForums. The RAT and its source code are for sale, making it accessible to everyone to create a custom version of this malware.

What Android RAT Malware can do on your Android phone?

What precautions android users should take ?

Varutra has developed a mobile application for checking vulnerabilities on the mobile operating system of your smartphone. Access the MVD application from https://www.varutra.com/mvd/ or download MVD app android version from Google Play.